You are here: Home » Dogs and Dog Treats » Dogs In Spring 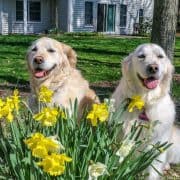 Welcome to the annual dogs in spring post. The flowers are finally blooming, so it is time for one of my favorite posts. I do love pictures of dogs with flowers.

This year, I took the pictures a week early. The flowers were out for 10 days already and waiting until May didn't seem smart.

The dogs have missed two grooming appointments already, so they are a bit thick in the fur department in-spite of brushing.

In the last two years, it has been a battle with them to set still, especially Molly would just wander away. But this year, 10 minutes and we had 30 pictures to pick from. They ran to the flowers and only had to be called back once. When released, they rocketed to the door, happy to be done with me.

Not a lot of flower sniffing this year vs previous years and I didn't get sniffing pictures, it just wasn't happening.

Editor’s note: Since this is an annual post of pictures, I re-edit the text and add this year’s pictures. Originally published April 17, 2017, which included pictures from multiple years.

Before we get to more dog pictures, we had a guest appearance at the pond in our backyard. Say Hi to Mr. Bald Eagle. This is the first eagle we have seen on our pond.

Eagles are becoming more common in our areas. But our pond, which was teaming with fish, suffered deep freeze a few years ago killing all the fish.  While a few small fish are slowly coming back, it will take years to recover. Hopefully, Mr. Eagle is a good sign. 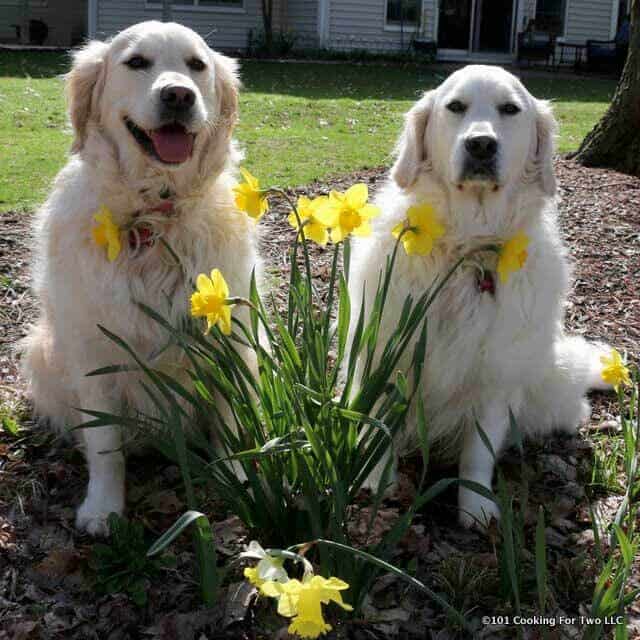 There is nothing like a good run in the spring. And our paws aren't even getting muddy.

2014 Dogs in flowers pictures - we were babies

This is Jake who died of cancer in 2013. He is very loved and missed. He loved going into the flowers and setting. But usually ran away if a picture was coming.

Check Out Other Great Dog Things

Have a great spring.
DrDan