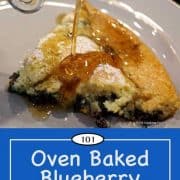 Are you pancake impaired? Or just don't want the mess? Try this foolproof method for great pancakes. Super easy, just mix and bake. No skill needed.

I cook fairly well, but I can make a mess of pancakes. I have had good days but the bad days are still frequent. I under-cook or over-cook, or I mess up the flip.

The pancake gods have not been kind to me. I tried to overcome this with a version called a "Dutch baby" but still had an issue. I needed pancakes for dummies. Well, this is it.

My wife is a "blueberry-hound," so I decide on a blueberry version, but any fruit could be used. Or plain would be just fine. I now have carrot cake and banana nut versions, too.

I based this on a Martha Stewart baked pancake recipe, but I simplified it. The original seemed a little heavy on the blueberries and was a little flat. Pump up the baking powder a little and cut back the berries a tiny amount and you have my wife repeatedly saying 5 and wanting this for Valentine's Day breakfast.

Rating from my wife and I won't disagree.

I used 10-inch cast iron, but a 9-inch pie pan or another pan should be fine.

This recipe makes a large breakfast for 2. If you want more, increase the amount by 50% and use two eggs and bake in a 12-inch pan.

Don't be afraid to turn the broiler on near the end to increase the browning.

How to Cook Bacon in the Oven

How To Cook Sausage in the Oven

Preheat oven to 375° with a rack about ⅔ of thirds of the way up the oven. Place an oven-safe pan into heat also. I used a 10 inch cast iron pan. A pie pan or fry pan would work also.

When the oven is hot, remove the pan and melt one tablespoon butter being sure to get sides.

Pour batter into the heated buttered pan. Sprinkle ¾ cup blueberries into the batter then sprinkle with 1-2 teaspoon sugar. Berries may be fresh or frozen (do not thaw).

Bake until browning nicely. 25 minutes for me. A toothpick should come out clean if you want to double check. You may want to turn on the broiler for 1-2 minutes to get more browning.

Remove from oven, allow to cool for a few minutes then sprinkle with powdered sugar (optional) to serve with syrup. 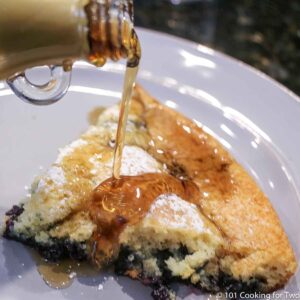 From Dan Mikesell AKA DrDan
Are you pancake impaired? Or just don't want the mess? Try this foolproof method for great pancakes. Super easy, just mix and bake. No skill needed.

Calories : 312 kcalCarbohydrates : 51 gProtein : 7 gFat : 10 gSaturated Fat : 6 gPolyunsaturated Fat : 1 gMonounsaturated Fat : 3 gCholesterol : 77 mgSodium : 541 mgPotassium : 152 mgFiber : 2 gSugar : 26 gVitamin A : 400 IUCalcium : 220 mgIron : 1.6 mg
Serving size is my estimate of a normal size unless stated otherwise. The number of servings per recipe is stated above. This is home cooking, and there are many variables. All nutritional information are estimates and may vary from your actual results. To taste ingredients such as salt will be my estimate of the average used.
Course :Breakfast
Cuisine :American