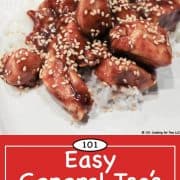 Quick, easy, and tasty. My absolute favorite Chinese dish. This is now a weeknight 30-minute recipe. And as a bonus, this version is much healthier.

I have worked on this recipe for almost a month. Most recipes are easy, but the workflow and the taste of model recipes just didn't work for me.

I started with an American Test Kitchen version that was an absolute disaster. Yes, I do have those. Over an hour of hard cooking, I created the biggest mess I have ever made in the kitchen.

Plus we hated it, way too much vinegar and poor results overall. With that much work, it needs to be great. I was very disappointed. My wife was likewise unimpressed. It went to the garbage.

Several more recipe trials and it was starting to get really old. What others thought was great and wonderful just wasn't. All had too much vinegar and too many unusual ingredients. Plus, they all took too much work for my "cooking for two" world.

Ultimately, I used a Martha Stewart recipe which was the inspiration for Lighter General Tso's Chicken from Tracey's Culinary Adventure. I used a little of both and simplified it.

Yep, a five but a lower five. There is some room for improvement but not much. I will be doing this over and over.

It is not a traditional Chinese dish, although it is probably some basis in traditional Chinese fare. Most likely what we now know as General Tso’s Chicken originated in New York City in the 1970s, but there are lots of conflicting claims about who and where.

Wherever it started, it is now standard fare on almost every North American Chinese restaurant. And always one of the most popular dishes.

This is a "lighter" version so skinless boneless chicken breasts are my choice here but thighs will work fine.

👨‍🍳Coating and Cooking the Chicken

The chicken is coated with some egg white and corn starch than pan-fried. So healthier than deep-frying and easier at home

The Martha method of cooking the chicken is a little fussy with turning each little piece to brown over and over. Plus doing it in two batches. This involves standing there continuously for about 20 minutes.

I put it all in at once and stirred occasionally. A little of the coating came off (some even came off in the Martha method also), but most stayed on, and your sin is hidden by the sauce anyways.

I don't usually cook with things you may not have in your kitchen, but I did use Hoisin sauce which is commonly available and good to have around. It is worth buying just for this recipe but has many uses.

Ultimately, I took the vinegar out completely of the recipe. There is some vinegar in the Hoisin sauce, and that was enough.

I left in some dry ginger, but many recipes call for fresh ginger which I don't usually have and we don't really like. Adjust if you want.

I have more brown sugar in this than may be needed, and I will be cutting that down some in futures cookings. I really think it can cut in half without much effect.

The only "special" thing is Hoisin sauce. I'm now going to stock it in my refrigerator.

Heat 2 teaspoons oil over medium-high heat in a large nonstick skillet or a wok. Whisk together 2 egg whites or one whole egg, corn starch, salt, and pepper.

Add chicken to the egg mixture and stir to coat.

Shake excess coating off the chicken and add one piece at a time to the hot oil. You can be a perfectionist and do half-turning them nicely for 8 to 10 minutes and repeat. OR put them all in and occasionally stir like lazy me for about 12-14 minutes. Be sure the internal temp gets to 165° by checking multiple pieces. Use 180° as your endpoint if using thighs.

When the chicken is done, transfer to a bowl and decrease the heat to medium-low. Add the sauce and whisk continuously while boiling until well thickened 2-3 minutes.

Add the chicken back in and stir to coat.

Transfer to serving dish and top with toasted sesame seeds you want.

From Dan Mikesell AKA DrDan
Make this delicious lighter General Tso’s Chicken at home in only 30 minutes. Just follow these easy step by step photo instructions.

Calories : 269 kcalCarbohydrates : 44 gProtein : 15 gFat : 4 gSaturated Fat : 1 gCholesterol : 37 mgSodium : 958 mgPotassium : 334 mgFiber : 1 gSugar : 33 gVitamin A : 149 IUVitamin C : 1 mgCalcium : 29 mgIron : 1 mg
Serving size is my estimate of a normal size unless stated otherwise. The number of servings per recipe is stated above. This is home cooking, and there are many variables. All nutritional information are estimates and may vary from your actual results. To taste ingredients such as salt will be my estimate of the average used.
Course :Main Course
Cuisine :Chinese