This cinnamon biscuits recipe is full of great cinnamon roll flavor in every bite. An easy recipe that only takes 30 minutes to make. Have great hot-out-of-the-oven cinnamon pastries for breakfast or brunch.

😊Why you will make this recipe over and over.

My "inspiration" recipes are my own biscuit recipe and Cinnamon Biscuits at food.com, which helped with some refinements.

Make ahead and leftovers.

Can uncooked biscuits be stored and baked later?

You you can make your biscuits a day or two ahead. Make out the biscuits, cover them tightly on a pan with plastic wrap, and refrigerate them for 1-2 days. Let set at room temperature for 15-20 minutes before baking.

You can also freeze uncooked biscuits. Make individual biscuits and freeze them on parchment paper. When frozen, move to an airtight container. They can be stored for 2-3 months. Spread on a tray and cover refrigerated overnight—then bake.

How to store leftovers.

Fresh is best but will be good for up to about 2 days at room temperature if sealed airtight.

You can freeze cooked leftovers, but I'm not a fan of freezing the frosting. So freeze for up to 3 months without any frosting. And then make a bit of frosting when needed.

This recipe is listed in these categories. See them for more similar recipes.

Mix dry ingredients of 2 ¼ cups flour, one tablespoon baking powder, one teaspoon salt, one teaspoon cinnamon, and ½ cup sugar. Mix well. Cut ¼ cup butter into the flour with a pastry cutter or fork.

Add ¾ cup milk, one egg, and one teaspoon of vanilla extract. Add optional nuts if using.

Mix until completely combined. Then roll the dough into a log on a lightly floured surface and cut it into eight equal slices.

While baking the biscuits, combine 1 cup of powdered sugar, ¼ teaspoon vanilla, and 1-2 tablespoons to make the glaze the thickness you want.

Remove from the oven and allow to cook for about 5 minutes before frosting. 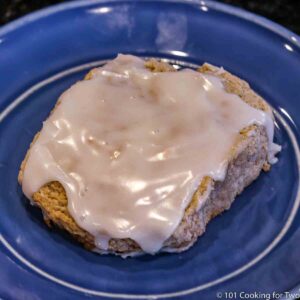 US Customary - Convert to Metric

Prevent your screen from going dark

See the step-by-step photos in the post. Some recipes have an option to display the photos here with a switch above these instructions but the photos DO NOT print.

Your Own Private Notes

Click here to save your own private notes only you will see. These will print and be saved for your next visit.

To adjust the recipe size:

Nutrition Facts
Cinnamon Biscuits with Vanilla Frosting
Amount Per Serving
Calories 318 Calories from Fat 72
% Daily Value*
Fat 8g12%
Saturated Fat 5g25%
Cholesterol 40mg13%
Sodium 346mg14%
Potassium 81mg2%
Carbohydrates 56g19%
Fiber 1g4%
Sugar 29g32%
Protein 5g10%
Vitamin A 298IU6%
Calcium 153mg15%
Iron 2mg11%
* Percent Daily Values are based on a 2000 calorie diet.
Serving size is my estimate of a normal size unless stated otherwise. The number of servings per recipe is stated above. This is home cooking, and there are many variables. All nutritional information are estimates and may vary from your actual results. To taste ingredients such as salt will be my estimate of the average used.
Course : Breakfast|Sweets
Cuisine : American

Originally Published May 8, 2016. Updated with expanded options, refreshed photos, and a table of contents to help navigation.

Hi, I’m DrDan, and welcome to 101 Cooking for Two, the home of great everyday recipes with easy-to-follow step-by-step photo instructions. About DrDan