Home » Cooking Techniques » How To Make Gravy at Home 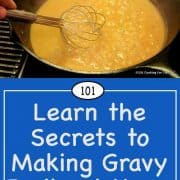 It’s time to learn the secrets to making gravy at home with these easy-to-follow photo instructions to both the slurry and the roux methods. You won’t believe how easy this can be. Get it right the first time and every time.

This post is less of a recipe but mostly instructions about techniques. Gravy is so easy if you just know how.

I usually use the slurry method with flour which I believe is the easiest and most consistent for the home cook.

The slurry method uses flour (although cornstarch and arrowroot also can be used). The flour is mixed with a cold liquid, usually water, and combine until there are no lumps. I like using a Tupperware shaker, but just a bowl and whisk will do.

A cornstarch warning: Do NOT use cornstarch if you believe it will be reheated. You will end up with a jelly-like mess. I will still be save and taste ok but you will have a major texture issue.

With this method, the flour starch is hydrated enough to prevent lumps before sturred into the drippings and liquid slowly. It is then brought to a boil which will help the liquid absorb and cook the "raw" out of the flour.

You can add more thickener if needed or dilute the gravy with some broth or water if needed.  I like about 2 tablespoons of flour to thicken 1 cup of gravy. I prefer a little fat in the drippings.

The roux method starts with fat in a pan. Flour is added, and it is cooked until browning some to cook out the raw flour taste, usually only a few minutes. A ratio of 2 tablespoons of flour to 2 tablespoons of fat will thicken 1 cup of liquid.

I find the slurry method easier for home. Leave the drippings in the pan. Add some broth if you need to and thicken away. No need to get all the bits of meat or veggies out of the drippings.

With the slurry method, you add more flour mixture to thicken. With the roux method, you don't add all the liquid at the start and then add more liquid to thin.

To start, read and understand the instructions BEFORE you start. You will not have time to read and do this at the same time.

Photo Instructions for Gravy with the Slurry Method

Equipment: Tupperware Quick Shaker is recommended, but a bowl and whisk will do, stovetop pan with a large bottom, a large slotted spoon or whisk.

First
Combine about equal amounts of AP flour and COLD water or broth in your Tupperware Quick Shaker (or a bowl and whisk). I generally make about 50% more than I estimate I need so I can thicken a bit more if needed later.

Shake vigorously and continuously. Get it all mixed. You want about 2 tablespoons of flour per cup of gravy you are making.

Second
You need fluid from your meat with some fat in it.  You could add broth or other liquid to get to the volume you want to make. You can also add soup base or bullion for more flavor.

The liquid needs to be in a stovetop-safe pan. Now over medium-high heat, bring the liquid to a boil. Turn on two burners if the pan will cover them.

Third
Slowly add the flour mixture to the area of hardest boil SLOWLY while VIGOROUSLY stirring with a slotted spoon or whisk. Turn the heat down a bit.

Pay attention to the thickness and stop adding the flour mixture when you get almost to the consistency you want. It will thicken a little with the cooking in the next step.

Fourth and Last
Continue to cook for another 2-3 minutes while still stirring continuously then remove from heat and serve immediately. This will cook the "raw" taste out of the flour.

NOTES: The Tupperware Quick Shaker is great in this technique. These are about $13 on Amazon, eBay, a Tupperware dealer, or a mall kiosk near you. Google is your friend again.

Photo Instructions for the Roux Method of Making Gravy

First
Over medium-high heat, heat your fat (butter, drippings from meat, etc.). When hot add an equal amount of flour slowly while stirring or whisking continuously.

Second
Cook until browning some. Then slowly add the liquid for the gravy. Add most of the liquid but not all.

Third
Stir continuously to combine and decrease heat some. Cook for a few minutes. Add more liquid if needed. 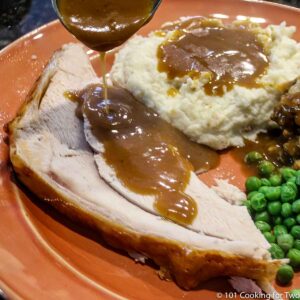 How To Make Gravy at Home

From Dan Mikesell AKA DrDan
It’s time to learn the secrets to making gravy at home with these easy to follow photo instructions to both the slurry and the roux methods. You won’t believe how easy this can be. Get it right first time and every time.

The Slurry Method of Making Gravy

The Roux Method of Making Gravy

Calories : 231 kcalCarbohydrates : 14 gProtein : 7 gFat : 17 gSaturated Fat : 3 gPolyunsaturated Fat : 9 gMonounsaturated Fat : 4 gCholesterol : 7 mgSodium : 343 mgPotassium : 262 mgFiber : 0.3 gSugar : 4 gVitamin C : 0.8 mgCalcium : 10 mgIron : 0.9 mg
Serving size is my estimate of a normal size unless stated otherwise. The number of servings per recipe is stated above. This is home cooking, and there are many variables. All nutritional information are estimates and may vary from your actual results. To taste ingredients such as salt will be my estimate of the average used.
Course :Sauce|Side Dish
Cuisine :American