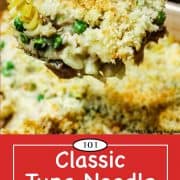 Homemade classic comfort food at its best. This easy-to-make tuna noodle casserole features a Parmesan topping. Scaled-down for the smaller household, it comes together quickly and will become a favorite easy weeknight meal.

Tuna noodle casserole has been on my to-do list for several years. Anytime I ask for suggested recipes from readers, it comes up.

But I had a few problems. I wanted an easy everyday recipe with great taste. I wanted less than 16 ingredients (yes, there was one). I didn't want to feed an army. And no hour mixing things.

Now that can of soup is not evil, but I tend to overreact to cooking with cans of soup. I enjoy reading recipes, and the classic crockpot recipe has at least two cans of soup, an envelope of onion soup mix, and several cans of something else. I find it very irritating they are calling this cooking.

So to give in to the can of soup is a bit painful but in this case, necessary. Any from scratch effort would be at least twice this size and four times more work.

A nice solid every day 4. That is as high as tuna casserole goes.

Use the tuna you love. My wife and I both grew up with water-packed Chicken of the Sea, and that is what I used. Feel free to change that out.

Also, this recipe uses twice as much tuna as many recipes. If I'm making tuna casserole, you will be able to find the tuna.

You could also use shredded cooked chicken if you wanted.

Other "cream of" soups will be fine. We always use celery, but mushroom or even chicken will work. We are using the thickening power to make it creamy.

We like to add celery and onion along with peas. Those are very typical. The celery and the onion need some precooking since the casserole doesn't cook that long.

Some people like mushrooms, but not really in our house. There are food allergies and just not a taste we normally add.

We love a Parmesan bread crumb topping. I have accused my wife of using a bigger pan so there could be more topping.  I would call the topping a feature of this recipe. It is just so good.

Once cooked, this casserole is good refrigerated for 3-4 days or frozen for 3-4 months.

You can make this ahead in an oven-safe pan. Prepare up to the point of cooking but seal well and freeze for up to 3-4 months. Be sure to defrost the frozen casserole overnight in the refrigerator before cooking.

Cook 2 cups pasta to Al Denta per package instructions. Two cups are half of a 1 pound box.

Chop one rib of celery and ½ medium onion. Saute in 1 teaspoon butter over medium-high heat until they are becoming a bit transparent—about 5 minutes.

Spread the topping over the casserole.

Bake until nicely browned. About 30 minutes. Remove and allow to sit for 5 minutes before serving. 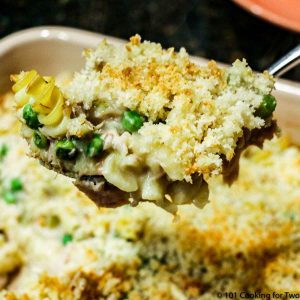 From Dan Mikesell AKA DrDan
Homemade classic comfort food at it's best. This easy to make tuna noodle casserole features a Parmesan topping. Scaled-down for the smaller household, it comes together quickly and will become a favorite easy weeknight meal.

Calories : 402 kcalCarbohydrates : 42 gProtein : 28 gFat : 14 gSaturated Fat : 7 gCholesterol : 63 mgSodium : 838 mgPotassium : 491 mgFiber : 4 gSugar : 7 gVitamin A : 908 IUVitamin C : 16 mgCalcium : 182 mgIron : 3 mg
Serving size is my estimate of a normal size unless stated otherwise. The number of servings per recipe is stated above. This is home cooking, and there are many variables. All nutritional information are estimates and may vary from your actual results. To taste ingredients such as salt will be my estimate of the average used.
Course :American|Main Course
Cuisine :American