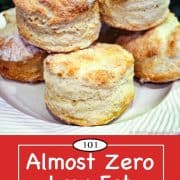 Almost zero-fat, these delicious non-guilt biscuits are tender and fluffy. I have for years called these Zero Fat Biscuits but, due to an insignificant amount of fat in the flour, they are now called Almost Zero Low-Fat Biscuits. Just follow these easy step-by-step photo instructions.

Some recipes are for low-fat, but this one is as low as they go—under 0.5 grams per serving due to a minimal amount of fat in flour. Using nonfat yogurt to replace the butter and milk, you still get great rise and texture. Plus, just a few ingredients will get you there.

For some unknown reason, I bought a large container of nonfat yogurt. I think I was going to make a low-fat carrot cake, but I ended up not using the yogurt.

So, time to experiment. I decided biscuits were a great place to start. With a little looking around, I found some guidance but not exactly what I wanted. So I modified my normal drop biscuit recipe with great results.

That surprised my wife with cut instead of drop biscuits. She wanted to know what was different other than the shape. So really the taste is very good and after being told about the yogurt, so was not sure she could taste it.

A high 4 or low 5. I love biscuits, but I don't usually have yogurt.

While I suggest using nonfat plain yogurt, many people want to use Greek yogurt.

Greek yogurt will add a bit more of a "twang" to the taste. But it is also generally a bit dryer. To use Greek yogurt, you may need to add a bit of milk, 1-2 tablespoons, usually depending on the brand.

There is a trace (read that as <0.5 gms) of fat per serving. Flour has about 1 gram of fat per cup (who would have known) and a touch from the zero fat yogurt (depending on the brand.)

The exact nutrition values depend entirely on the ingredients you choose. Different brands may have different nutritional values, and they may change their product over time.

About 137 calories per biscuit at eight biscuits. However, if you op tor 6 larger biscuits, so they are 184 calories each.

How Are They Different?

Note: Pictures are from various times cooking, so may not match.

Add 1 ¼ cup nonfat yogurt. Fold in until all dry is incorporated. If you use Greek yogurt, you may need a tablespoon or so of milk.

The easiest is to do 8 drop biscuits. If you want to cut biscuits, spread the dough on a floured surface about ¾ inches thick. You can cut six 2 ½ inch biscuits or eight 2 inch biscuits.

Place your biscuits on a PAM sprayed baking pan.

Bake until golden brown. About 12-15 minutes. 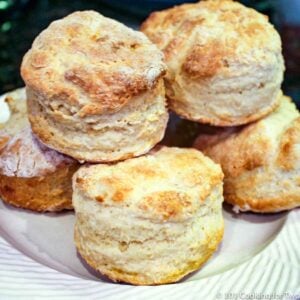 From Dan Mikesell AKA DrDan
Almost zero-fat, these delicious non-guilt biscuits are tender and fluffy. I have for years called these Zero Fat Biscuits but, due to an insignificant amount of fat in the flour, they are now called Almost Zero Low-Fat Biscuits. Just follow these easy step-by-step photo instructions.

Calories : 137 kcalCarbohydrates : 27 gProtein : 5 gFat : 0.4 gSaturated Fat : 0.4 gCholesterol : 1 mgSodium : 245 mgPotassium : 283 mgFiber : 1 gSugar : 3 gVitamin A : 3 IUVitamin C : 1 mgCalcium : 146 mgIron : 2 mg
Serving size is my estimate of a normal size unless stated otherwise. The number of servings per recipe is stated above. This is home cooking, and there are many variables. All nutritional information are estimates and may vary from your actual results. To taste ingredients such as salt will be my estimate of the average used.
Course :Bread
Cuisine :American