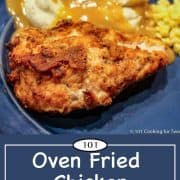 Oven-fried KFC? Is it the real spices? You be the judge. This is the alleged original KFC spices found in a family album by a nephew of the Colonel himself. It has the promised 11 spices, and the spices fit the era of the development; it seems right.

We all love fried chicken, and KFC does it for most of us. Over the years, they have dominated the fast-food fried chicken market. I will call this a copycat recipe but the spicing seems to be the original.

Kentucky Fried Chicken has used lots of advertising phrases, but one of the early ones, in addition to "Finger Lickin' Good," was "eleven herbs and spices," and referred to their super-secret recipe. It seemed to be locked up and guarded closely.

The higher spice version brings back visions of my childhood when KFC was a very special treat. So if not the real recipe, then very close.

📰The Story of the KFC Recipe

The original recipe is a closely guarded secret that is in a vault at the company's headquarters. Handwritten by the Colonel himself, it is said. This story is about the nephew of the Colonel, Joe "H.D." Lexington and a family album he inherited.

In the album is his aunt's will, and on the back of the will is a handwritten note titled "11 spices". He believes it is real, and he mixed tons of this at his uncle's restaurant as a child. I tend to believe it. Especially after my trial cooking.

Check out the original article at the Tribune. A very interesting read and has a picture of the note. But also check out their test cooking of the recipe.

Since published, lots of speculation has been floating around the internet. Is it real or isn't it? Finally, the company said no but would they say yes? Or is it just "almost right" maybe the measurement issues are why it is not correct.

I'm sure you see a problem right away. What the heck is "Ts"? I assumed teaspoon since tablespoons would be a ton of spices in ratio to the flour. Almost one cup of spice to 2 cups of flour.

I'm not trying to make a box of KFC with skin on deep-fried chicken. We home cooks don't have the pressure deep frier they used anyway. But, we are looking for a moist and tender chicken with that great taste.

We generally will use skinless boneless chicken breast for most of our home cooking. And that is what I recommend here.

Try to use breasts of almost the same size if possible. Also, if they are thick, flatten out the thickest part to about ¾ inches thick with a meat mallet or bottom of a heavy pan.

Super moist with the milk marinade. Now the rating is for the spices only. The technique is more of a high 3 or low 4 since the buttermilk I believed prevented the coating from sticking well. I'll be using plain milk, and no egg like my original oven recipe uses.

I went with an oven-fried version since that is what I will do in the future. I'm not a stovetop frying person.  So I modified one of my favorite recipes Crispy Oven Fried Chicken with Gravy.

Since I wanted to test the taste of the spice mix, I originally mirrored the Tribune buttermilk/egg marinade. But I now recommend just use milk. I don't think the egg did anything for my oven-fried version. And you can use Buttermilk if you want.

The Tribune felt a sprinkle of MSG would make the chicken taste identical to the current KFC, which does have MSG.

But MSG is not in the recipe, and most people don't keep it around. It would severe as a "flavor enhancer" but I'm skipping it and going with the high spice version. Enough flavor for me and I believe the original recipe I remember from the 1950's. That is slightly different than the current version which seems to have a bit less spice explaining the need for MSG currently.

The nephew felt the major "secret ingredient" was the white pepper. I think he is right.

Final note, it is easier and probably cheaper to just go to the restaurant. But this is interesting.

Gravy is optional but highly recommended. I'm using a "slurry" method. See How To Make Gravy at Home for detailed instructions.

Yes, it is very high. Normal for the 1940s. Most is hidden in the garlic salt and celery salt. You can do some substitutions that will retain the taste but get rid of the sodium.

You can use ½ the volume of the celery salt as the celery seed powder. And ¼ of the volume garlic salt as garlic powder. That cuts the sodium way down to about 600.

Start with trimming two skinless boneless chicken breasts. Try to use breasts of about the same size. If thick, flatten to ¾ inch thick with a meat mallet or heavy pan.

Mix 2 cups buttermilk or milk. The original recipe in the Tribune used an egg in the marinade. I no longer use it but you can if you want. Add the chicken and allow to marinate in the refrigerator for 30-60 minutes.

Preheat oven to 375° convection or 400° conventional. Mix the 11 spices with the flour.

Prepare an oven-safe pan with 2 teaspoons vegetable oil. Remove chicken breast one at a time, allowing the excess marinade to drain off. Dip in the spice/flour mix, cover completely, shake to remove excess, and place in the pan or on a rack.

Give any of the coating on the breasts that looks dry a light spray of PAM. Allow to sit for 20-30 minutes. This will help the coating to stick.

Bake until internal temp of 165°, about 35-40 minutes. Cooking time will vary some due to oven variations, the size, and thickness of the chicken, and the pan used.

If you want gravy, remove chicken from pan. Mix 1 cup of chicken broth with 4 tablespoons flour either by whisking or in a shaker. Over medium-high heat, add 1 more cup of chicken broth to the pan and bring to a boil. Slowly add the flour mixture while whisking continuously until thickened and then a few more minutes. If some of the breading come off the chicken, leave it in the gravy as flavor bombs. 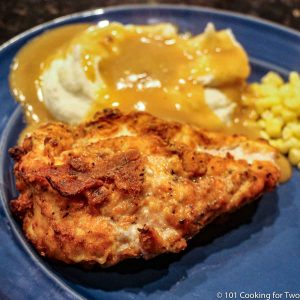 Oven Fried Chicken - Is it KFC?

From Dan Mikesell AKA DrDan
Oven-fried KFC? Is it the real spices? You be the judge. This is the alleged original KFC spices found in a family album by a nephew of the Colonel himself. It has the promised 11 spices, and the spices fit the era of the development; it seems right.

In Pan for Oven

Calories : 278 kcalCarbohydrates : 24 gProtein : 28 gFat : 8 gSaturated Fat : 4 gCholesterol : 72 mgSodium : 2576 mgPotassium : 545 mgFiber : 3 gSugar : 1 gVitamin A : 1786 IUVitamin C : 3 mgCalcium : 34 mgIron : 3 mg
Serving size is my estimate of a normal size unless stated otherwise. The number of servings per recipe is stated above. This is home cooking, and there are many variables. All nutritional information are estimates and may vary from your actual results. To taste ingredients such as salt will be my estimate of the average used.
Course :Main Course
Cuisine :American