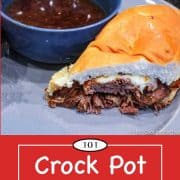 An easy recipe for crock pot French dip sandwiches that are melt in your mouth tender and bursting with a wonderful flavor. Topped with cheese and dipped in au jus, it is a casual dining delight.

I came home from work last week, and my wife was smiling... an "I have an idea" smile. She shows me a nice-looking beef roast and dummy me said, ok roast beef for Sunday family company, and I started talking side dishes.

She interrupted, saying that "you're doing French dip." Now I love French dip, and it has become my standard lunch if we're out and about. And I have become a real critic.

She even had the recipe. I didn't have the ingredients for that recipe, so a little Google, a little from this, and some from that recipe. I had a plan.

Start with a nicely trimmed beef roast. Brown to get some Maillard reaction, cook in a crock pot in a nice juice and in caramelized onions. Then, slice about 2 hours before done and finish cooking for ultra-tender wonderfully tasty meat.

Serve on a hoagie bun after topping with cheese and browning under the broiler. Finally, serve au jus which happens to be the cooking liquid.

My wife has already awarded it the recipe of the year.

Your beef roast needs to be nicely trimmed, so you don't have to pick out uneatable things. And it has to have good marbling to be tender. Two to three pounds will do nicely.

The beef choice is up to you. Sirloin and eye of round are commonly recommended but maybe a bit lean. A nice chuck roast is a good choice. My favorite is an English cut chuck roast.

I think it is great to brown the meat some and also precook the onions although a lot of the crock pot French dip recipes skipped these steps—it will add flavor.

Use a mild creamy type of cheese for French Dip Sandwiches like provolone or mozzarella cheese which is my choice as the best choice.

Monterey Jack cheese would also be good choice but avoid strongly flavored cheeses like sharp cheddar which will mask the flavor of your sandwich.

What to Do With Leftover Beef Tenderloin? Philly Sandwiches

Start with a nicely trimmed beef roast. Salt and pepper to taste.

Over medium-high heat, add two teaspoon oil, and when hot, brown the roast for about 3 minutes per side. Then move roast to the crock pot.

Add two large sliced onions to the pan and cook for a few minutes until clearing then add two cloves of garlic and cook one more minute. Move to the crock pot.

Return to the crock pot to cook for the final 2 hours.

At the end of cooking, break up the slices a little to make serving easier.

To serve, cut hoagie buns into half. Top the bottom half with meat and provolone cheese—Cook under a broiler for a few minutes until cheese is nicely brown. Also, toast the tops of buns for a brief time.

Serve with the cooking solution as au jus for dipping. 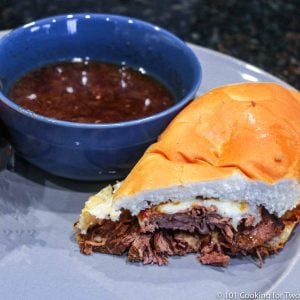 From Dan Mikesell AKA DrDan
An easy recipe for crock pot French dip sandwiches that are melt in your mouth tender and bursting with a wonderful flavor. Topped with cheese and dipped in au jus, it is a casual dining delight.

Nutrition is only for the meat and not for sauce, bun, or cheese.
Have More Questions? See the Table of Contents

Calories : 151.4 kcalCarbohydrates : 3 gProtein : 24.7 gFat : 3.8 gSaturated Fat : 1.3 gCholesterol : 62.4 mgSodium : 103.2 mgPotassium : 436.1 mgFiber : 0.5 gSugar : 1.2 gVitamin A : 1 IUVitamin C : 2.3 mgCalcium : 31 mgIron : 2.1 mg
Serving size is my estimate of a normal size unless stated otherwise. The number of servings per recipe is stated above. This is home cooking, and there are many variables. All nutritional information are estimates and may vary from your actual results. To taste ingredients such as salt will be my estimate of the average used.
Course :Main Course
Cuisine :American