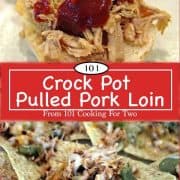 Healthy and low-fat "pulled" pork from a pork loin using a slow cooker is almost no work recipe with these easy step-by-step photo instructions.  A great recipe for parties, tailgating, and large gatherings. Use it for BBQ, use it for Mexican or anywhere you want a moist and tasty shredded pork.

I love pork, but pork loin is way too lean for shredding but cooking it in a spiced-up braising liquid and then adding some back for moisture will get you what you want.

I modified my own oven-based shredded pork loin recipe. I'm giving you two options.  One for BBQ and one for Mexican.

I consider this a great recipe for parties, tailgating, and large gatherings. It makes make more than we usually want but it does freeze well. But if you want to feed BBQ a group cheap, this is it.

No, it is not equal to slow-cooked pulled pork from a smoker. BUT is darn good, moist and tasty and a heck of a lot easier and healthier.

Pork loin is just inside of the baby back ribs. When cut into slices, we call it pork chops. And is not a pork tenderloin which is a different cut of meat.

It is frequently sold in vacuum packs from pork processors and usually in the 5-pound range or bigger. It is great to cut into boneless pork chops or use like I do here.

A whole pork loin, which is usually 5-6 pounds is just too big to do this recipe. Go over to the oven method and use a larger pan. I have used that recipe several times for mss cookings.

It is generally so lean I'm not a fan of using it for a roast since it will usually come out tough or dry.

Spice to your taste. Add some garlic, brown sugar, cayenne or crushed red pepper. I have provided instructions for both "pulled pork" loin BBQ and a Tex-Mex version which will be most uses.

Lastly, this will freeze very well, so it is a good recipe for smaller households.

Pulled Pork on a Gas Grill – Not That Hard

Start with about 2 ½-3 pounds of pork loin. That is half of most pork lions. The other half will freeze well.

Trim the pork loin and cut into four equal slices.

To a medium to large size crock pot add one 14 oz can of beef broth, the chopped small onion, 2 tablespoons chili powder, ½ teaspoon salt, and 1 teaspoon cumin for Mexican or 1 teaspoon liquid smoke for BBQ (optional).

Place the loin in the crock pot. Cook on high for 3-4 hours until falling apart.

Move all the brazing liquid to a bowl.

Add the shredded pork back to the slow cooker. Add back about ½ cup of the braising liquid per pound of pork. So I started with 3 pounds and added back 1 ½ cup. You may need a little more or less. Test the moisture and add a bit more if needed.

If doing Mexican, you can add a cup of salsa. Add 1 cup BBQ sauce if your choice is BBQ. Continue to cook on low for another 30-60 minutes. 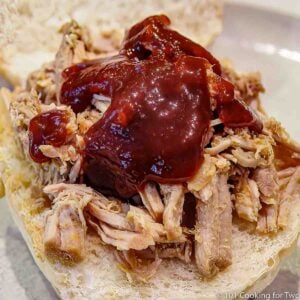 From Dan Mikesell AKA DrDan
Healthy and low fat "pulled" pork from a pork loin using a slow cooker is almost no work recipe with these easy step by step photo instructions. Use it for BBQ, use it for Mexican or anywhere you want a moist and tasty shredded pork.

Calories : 226 kcalCarbohydrates : 4 gProtein : 31 gFat : 8 gSaturated Fat : 3 gPolyunsaturated Fat : 1 gMonounsaturated Fat : 4 gCholesterol : 84 mgSodium : 304 mgPotassium : 609 mgFiber : 2 gSugar : 2 gVitamin A : 650 IUVitamin C : 7.4 mgCalcium : 40 mgIron : 1.6 mg
Serving size is my estimate of a normal size unless stated otherwise. The number of servings per recipe is stated above. This is home cooking, and there are many variables. All nutritional information are estimates and may vary from your actual results. To taste ingredients such as salt will be my estimate of the average used.
Course :Main Course
Cuisine :BBQ

Originally published March 22, 2013. Updated with expanded options, refreshed photos, and a table of contents to help navigation. Some photos are from other posts for illustration purposes.