Home » Side Dish Recipes » Microwave Corn on the Cob 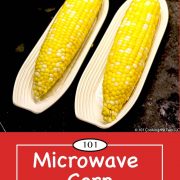 Super Easy. Learn how to pick the best corn and microwave with the husk on in just a few minutes. Perfect for the smaller households.  Just follow these easy step by step photo instructions.

We all look for shortcuts. We want great results but faster and easier. This is it.

It turns out that you can just toss the ears, husks and all, into the microwave. Cook them and then shuck them.

The easiest way to shuck is to cut the bottom of the ear off and squeeze the ear out. The corn silk will stay with the husks.

One of the keys to cooking in a smaller household is great quick side dishes. This is it.

I suggest microwave for cooking up to 4 ears of sweet corn. If you are doing more, an alternative method like the oven or boiling would be more time effective. I will discuss both below.

What is not to love about fresh sweet corn.

🌽How to Pick the Best Sweet Corn

Notes on Sweetness of Sweet Corn

There are several hundred types of sweet corn. Some have enhanced the sweetness, and unless you planted the corn, you wouldn’t know the variety.

What you can control is the freshness since the sugar in the corn starts to deteriorate rapidly as soon as picked and in 3-4 days will be mostly starch. The easiest route for most of us to the sweetest corn is by getting the freshest corn.

Should You Take a peak?

The most common way to choose an ear of corn is to take a peek. My mother always did.  Peel down the husk a bit and check for bright, plump kernels.

But in addition to being questionable from an etiquette point of view, it also allows that ear you didn’t buy to deteriorate faster. But also, it is probably not very effective.

So, How Should I Pick?

Limits of this technique.

I feel the microwave is great for 1 to 4 ears of corn. It takes 4 minutes per ear, and you can probably only fit four ears in the microwave (note: you can not stack it).

You could wrap the first batch while a second batch cooks, but there are so many great ways to cook sweet corn.

How to Boil Sweet Corn

Corn in the Oven

Corn On the Grill.

Plus many many more ways that work well.

Start with 1 to 4 ears of corn. Prep the corn by first trimming back the stalk. Not too much, you want to keep the husk intact.

Next, trim off most of the silk and loose husk at the top of the ear.

Remove from oven with a hot pad. With a SHARP chef knife cut off the bottom of the ear of corn. I take out the bottom row of kernels usually. But you can always cut again if you don't get enough.

Slide the knife between the ear of corn and the husk and cut a couple of slits through the husk about 2 inches up two sides.

Squeeze the corn out of the husk. The silk will stay with the husk.

Serve hot with salt, pepper, and butter to taste.

Microwave Corn on the Cob

From Dan Mikesell AKA DrDan
Super Easy. Learn how to pick the best corn and microwave with the husk on in just a few minutes. Perfect for the smaller households.  Just follow these easy step by step photo instructions.

Nutrition Note: Value given is for just the corn. ½ teaspoon of butter and ¼ teaspoon of salt would add 18 calories and about 600 to the sodium.
Have More Questions? See the Table of Contents

Calories : 77 kcalCarbohydrates : 17 gProtein : 3 gFat : 1 gSaturated Fat : 1 gSodium : 14 mgPotassium : 243 mgFiber : 2 gSugar : 6 gVitamin A : 170 IUVitamin C : 6.1 mgIron : 0.5 mg
Serving size is my estimate of a normal size unless stated otherwise. The number of servings per recipe is stated above. This is home cooking, and there are many variables. All nutritional information are estimates and may vary from your actual results. To taste ingredients such as salt will be my estimate of the average used.
Course :Vegetable
Cuisine :American

Editor's Note: Originally published July 19, 2012. A guide to picking the best corn added and updated with expanded options, refreshed photos, and a table of contents to help navigation.