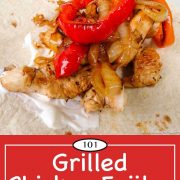 I'm calling you out Chilies. Chicken fajita from scratch in less than 30 minutes from starting to get the ingredients out to serving (28 minutes really) and including heating the grill. And a big plus, mine tastes better too.

I love the sizzling of fajitas serving in a good Mexican restaurant, but why not just do it at home. It is a relatively simple dish.

You've seen the recipes, but you never try them. You know the recipes on the packing material of your new toy. But this time on the box of my new heavy-duty griddle I struck gold, it was just what I was thinking of anyways.

I simplified the technique and cut the cooking time on the veggies, or they would be burnt toast. And the chicken took a few more minutes then the recipe stated. And I changed up the spicing a bit.

A high 4 or lower 5. I was in the mood for Mexican and just loved it.

This needs about 1 ½ pounds of chicken, give or take a bit. I chose skinless boneless chicken breasts, but thighs would work great.

Trim the chicken well and cut across the grain of the meat as much as possible.

I try to keep recipes to things I always have on hand, and I think most of you will also. But there are two things in this recipe you might not keep.

First, red wine vinegar may not be in your pantry. It has a nice, not in your face taste for things like salads.

If you don't have red wine vinegar, you can substitute some apple cider or rice vinegar but not at the same volumn. Do about a third to half the volume and taste test it. Vinegar can overwhelm a dish quickly.

Second, is the lime. I buy them frequently for recipes but I do not keep them around. So I do keep some lime juice in the refrigerator usually. Or you can just slip it.

Other suggestions  Add some cumin if you want spicy.

Do I have to do this on a grill?

No, you could do this on the stovetop with a skillet.

Preheat grill with a griddle or large grill pan in place on high. And oil.

In a medium bowl whisk all marinade ingredients together.

Clean and cut chicken into strips across the grain.

Add chicken to the marinade. Mix well and let sit at room temp while dealing with veggies. Refrigerate if not being used within 30 minutes.

Cut onion and peppers and coat with 1 tablespoon olive oil and ¼ teaspoon salt.

After the grill is preheated for at least 10 minutes, place vegetables on the griddle and occasionally stirring, cook about 6 minutes until starting to brown and softening. Grill lid should be open for this recipe. If browning too fast, turn down the heat or move to a cooler part of the grill.

Place chicken on the griddle and cook for about 6-8 minutes until cooked well. Stir every few minutes along with the veggies. You should be able to cut the chicken with a wooden spoon when done and an internal temperature of 165°.

Then mix in vegetables and stir well. Serve. 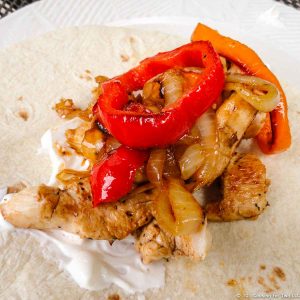 From Dan Mikesell AKA DrDan
Grilled Chicken Fajitas are a great blend of well seasoned; marinated charred chicken served with bell peppers and onions all wrapped in a warm tortilla. Just follow these easy step by step photo instructions.

Calories : 202 kcalCarbohydrates : 6 gProtein : 24 gFat : 10 gSaturated Fat : 2 gPolyunsaturated Fat : 1 gMonounsaturated Fat : 6 gCholesterol : 65 mgSodium : 670 mgPotassium : 157 mgFiber : 2 gSugar : 3 gVitamin A : 300 IUVitamin C : 70.1 mgCalcium : 20 mgIron : 1.1 mg
Serving size is my estimate of a normal size unless stated otherwise. The number of servings per recipe is stated above. This is home cooking, and there are many variables. All nutritional information are estimates and may vary from your actual results. To taste ingredients such as salt will be my estimate of the average used.
Course :Main Course
Cuisine :Mexican