Grilled tilapia with paprika is an easy and quick weeknight dinner recipe. Start with economical tilapia, add simple spices, and a few minutes on the grill. It’s time to eat more fish, and this favorable healthy dish fits that need.

My wife is always asking for fish, but I just don't seem to think of it very often. I'm from Iowa, and if it doesn't moo or oink, you don't eat it. But it is time to break out of those old habits, and this is a great way to start.

The inspiration recipe was a Cooking Light recipe. It looked a bit bland, so I upped the flavor in the coating and now depend on your choice of the type of paprika for the taste you want.

A very nice higher four but could be a lower five if you're not from Iowa.

Tilapia is a mild-tasting fish that is easy of mass to production on farms. So it is a widely available, healthy protein source.

They are generally freshwater inhabiting shallow streams, ponds, rivers, and lakes. They are native to Africa and the Middle East. However, they’ve been distributed around the world, and they’re farmed almost everywhere. They can tolerate a wide range of temperatures and are very hardy. Due to these characteristics, they can act as an invasive species at times.

Some internet "health sites" have been attacking tilapia as unhealthy using "click-bate" headlines like "worse than bacon." While you can attack any farm-raised fish for the method, or any farm product for that matter, the facts still support tilapia as a good source of low-fat protein.

Tilapia is lower in omega-3 than some wild fish but also lower in mercury. You can have that whole discussion about the impact of over-fishing of oceans. It goes on and on. If you want to debate this whole issue, do not comment here. This is a cooking site. I'm sure I know more nutrition and medicine than you, and I will delete any comment about this issue.

Can I use frozen tilapia?

Yes. Either fresh or frozen will be fine. I suggest thawing the frozen tilapia before starting, but some will cook with unthawed frozen fish. My experience with that is the seasoning washes off while cooking some. So please thaw first.

The main seasoning is paprika. It comes in an infinite variety, but I generally like nice sweet paprika. But I'm a wimp. Here is a summary of some classifications that may be useful, but these are just some guidelines that help. But they come from nature, so the variety is wide.

Sweet Paprikas are the most common types and are usually just labeled as paprika. They will generally have some sweetness, bright color, and usually only a little heat.

Hot Paprikas are commonly called Hungarian and will add spiciness and a lot more flavor than the sweet version. Some versions will be quite hot. So know what your variation brings to the party.

Smoked Paprikas known as Spanish and are made with oak-smoked peppers. They can run from mild to very hot in spiciness. Many will users like the deep smoky flavor, but to me, it oakiness gets in the way usually.

You need a hot griddle or an enclosed grill basket you can flip. They will need a nice coat of a higher temperature oil - so not olive oil.

This is one of the few recipes to grill with the lid open since the fish is thin.

Preheat grill with a griddle on medium heat with a grill surface temperature of 450°-500° and hood open. Spray griddle with grill rated Pam or brush with oil (Not EV olive oil).

Brush oil/spice mixture on both sides of the fillets and place on griddle.

Cook about 4 minutes per side with lid OPEN. 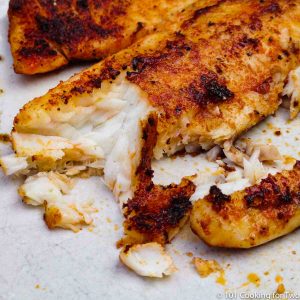 From Dan Mikesell AKA DrDan
Grilled tilapia with paprika is an easy and quick weeknight dinner recipe. Start with economical tilapia, add simple spices and a few minutes on the grill. It’s time to eat more fish and this favorable healthy dish fits that need.

Calories : 146 kcalCarbohydrates : 1 gProtein : 23 gFat : 6 gSaturated Fat : 1 gCholesterol : 57 mgSodium : 642 mgPotassium : 374 mgFiber : 1 gSugar : 1 gVitamin A : 493 IUCalcium : 11 mgIron : 1 mg
Serving size is my estimate of a normal size unless stated otherwise. The number of servings per recipe is stated above. This is home cooking, and there are many variables. All nutritional information are estimates and may vary from your actual results. To taste ingredients such as salt will be my estimate of the average used.
Course :Fish|Main Course
Cuisine :American