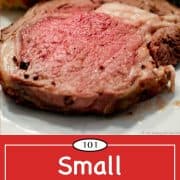 Ribeye roast is a classic main entree for a special holiday or family meals, but the size of a rib roast is just not made for many smaller households. Learn to cook this delicious meal without eating leftovers for a week.

A ribeye roast is a great company meal. But do you want to cook 5-10 pounds of meat if you have a smaller household? That will feed 10-20 people. That is just not friendly for most households.

Let’s make the ribeye roast “friendlier” for smaller households with these easy step by step instructions. Cut down for the smaller household; this recipe will not leave you eating leftovers all week.

I will confess, ribeye roast is just one of the cuts of meat I generally have passed over. They are generally huge and is just the wrong size for our home needs. But it can be “friendlier” for smaller households on special occasions.

I used an Allrecipes.com recipe for inspiration but had some changes. Most significant is the decrease in butter. Due to the initial searing temperature of 500 degrees, that amount of butter is just going to melt off and smoke.

A very nice roast with great taste and fork-tender. A nice 5.

There is some confusion about prime rib vs. ribeye. The first point is “prime rib” is more of a marketing term. What we think of as prime rib is generally a rib-in standing rib roast. It does not need to be prime grade, but will usually be choice grade.

I also want to mention that a ribeye is not an "eye of round." Eye of round is from the "round" area in the diagram above near the tail area. It is lean but can use a similar cooking technique.

If you have a rib steak (prime rib steak), then the rib bone is left intact. But in a bone-in ribeye steak, rib bone will be cut through in the interest of consistent thickness. But most ribeye steaks in the US are boneless. If bone-in ribeye steak in the US, it will usually be called a cowboy steak or cowboy ribeye. This is usually cut 2 inches or thicker.

So, in summary, ribeye is not a prime rib, while prime rib does contains the ribeye. A prime rib may not be prime graded, although I think it should be, so ask. Roast with rib may be called “prime rib” or standing rib roast. In the US, things labeled ribeye will almost always be boneless.

Now you are educated or very confused.

After an initial 20 minute searing at 500° oven for 20 minutes, then decrease the temperature of the oven to 325° and continue to roast until desired internal temperature.

But when I used a roast slightly over 3 pounds, it added about 30 minutes to the above cooking times. So pay attention.

Even though I took some steps to decrease the smoking oven issues. Mainly I cut back the butter that was going to melt off and having no chance of adding flavor.

You probably will still have some because you have fat from the meat and butter in a 500° oven. Fat is going to hit hot metal somewhere and smoke.

So you have some choices about if this smokes too much for you:

How to Grill a Ribeye Steak on a Gas Grill

How To Roast a Turkey Breast with Gravy

How to Grill a Pork Tenderloin on a Gas Grill

Preheat oven to 500 degrees and lower a rack so the roast will be in the middle of the oven.

Mix 3 tablespoon of softened butter with 3 cloves of crushed garlic. Poke a 15-20 half inch knife holes into the roast.

Slather the butter/garlic mixture onto the roast, pushing some of the mixture into the holes. Add some salt and pepper to the roast. Prep a roasting pan with a rack and give the rack a heavy coat of PAM. A cake pan is good here. The pan needs some sides to prevent splatter. I suggest using the rack and a bit of water under the rack to cut down the smoke.

Place the fat side up on the rack and into a 500-degree oven for 20 minutes, then decrease the temperature of the oven to 325 degrees and continue to roast until desired internal temperature. For my 2 ½ pound roast, an additional 45 minutes for 130 degrees, 55 minutes for 140, and 60 minutes for 145. But when I used roast slightly over 3 pounds, it added 30 minutes to the cooking time. Never cook by time alone. Always check with a meat thermometer.

Tent lightly with foil and allow to rest for 15-20 minutes before cutting. Remember, the roast may increase a few degrees when tented. 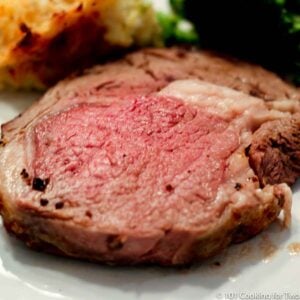 From Dan Mikesell AKA DrDan
Ribeye roast is a classic main entree for a special holiday or family meals.. Learn to cook a smaller version of this delicious meal without eating leftovers for a week.

You may have some smoke issues. You have some choices.

Calories : 456 kcalProtein : 39 gFat : 32 gSaturated Fat : 14 gPolyunsaturated Fat : 1 gMonounsaturated Fat : 11 gCholesterol : 131 mgSodium : 710 mgPotassium : 442 mgVitamin A : 200 IUIron : 4 mg
Serving size is my estimate of a normal size unless stated otherwise. The number of servings per recipe is stated above. This is home cooking, and there are many variables. All nutritional information are estimates and may vary from your actual results. To taste ingredients such as salt will be my estimate of the average used.
Course :Main Course
Cuisine :American